After close to 24hours of not having enough sleep, we strolled along the airport in Delhi for an hour before taking a 1 hour flight to Dehradun. Reaching there at noon, we took a prepaid taxi to Haridwar, a holy Hindu town near Rishikesh.

There, we were greeted by Rohit, an English teacher with his own English language centre. We were asked to give a 1.5hour talk about ourselves and our travels to his students. We really enjoyed it and were quite delighted that his students were very supportive and warm. At night, we tried to look around for a taxi or rickshaw to get to Rishikesh because Rohit has helped to arrange for a Czech girl to host us for the night in Rishikesh. With our overloaded backpacks in a cold, dark and unfamiliar area, we desperately succumbed to an overpriced rickshaw ride that cost us more than 10 times the actual fare locals paid.

When we reached Rishikesh, I felt a positive surge of energy running within me. Crossing the legendary Ram Jhula bridge, the day’s stress just disappeared as I savoured the soothing wind scented by the revered Ganga River. We took a while to find Petra, our 26-year-old host from Czech Republic, even though it was just a few minutes walk on the other side of the bridge.

Petra greeted us with ginger honey lemon tea for us, cooked some kind of rice mixed with spices and herbs and left her room for us to have our privacy while she slept in her friend’s room. We were really grateful to be acquainted with a hospitable individual like her.

We woke up early the next morning to start hunting for rooms. After 2 hours, we came back full circle to the ashram where Petra is staying and clinched a deal to stay 3 rooms away from her for just 200 rupees ($4.80) a day! We had a small kitchen, toilet, double bed, small hall to put our massive bags and best of all, a balcony overlooking the Ganga River!

View of Ganga River from our balcony. Watching the sunset and sunrise from here is purely a bliss.

Ram Jhula Bridge, 3 mins away from our apartment.

We intended to stay for 2 weeks but in Rishikesh, every single day was an adventure. We made new friends on a daily basis who will give us information on what to do or where to go. Luck was rolling its momentum for us and like in Tiruvannamalai, coincidences happened so frequently that we could not just brush it off as pure random chance.

Our best relationship was made with Katherine, a 51 year old Singaporean. She recognised our accent while we were buying bread and we became travelling buddies afterwards. Kat is travelling for 6 months in India and was voluntarily teaching in a school in Leh before heading down to Rishikesh to run away from the oncoming winter.

Hsiao Ting (affectionately called Ting) is a travelling veteran. An avid explorer since graduating from university, she had traveled extensively for the past 10 years only returning to Taiwan to for 6-18 months at a time to work, safe money and then set off again until her financial well dries up.

Shanti is Hsiao Ting’s younger sister. Shy and reserved, she was the total opposite of Ting. Greatly influenced by the adventures of her sister, she decided to travel India for 3 months and from the looks of it, have been infected by the travelling bug. She will be returning in mid-December to work, save and then try for a 1-year working holiday in Australia in June 2013. 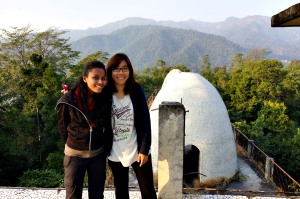 Camila is a yoga teacher who looks 10 years younger than her age. Fearless and confident, she is travelling solo and looking for a suitable ashram or yoga school to hone her skills. She was an inspiration because despite having an office job for the last 20 years, she decided to quit and start afresh at 40 to follow her passion for yoga.

The 3 Taiwanese girls then introduced us to Philip, an enthusiastic German trekker who was willing to guide us for a trek in Uttarakhand’s magnificent mountains for free. Because of Philip, we saved about $1000 as were close to signing up for a 6-day trek at a similar region. He guided us for 5 days in Kedarnath and Chopta, the most magnificent views we both have witnessed in our lives so far. (Details to be covered during next blog entry) 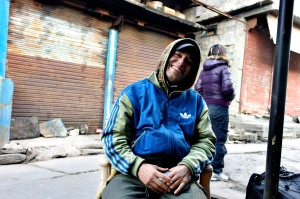 There were other significant friends we made along the way. Sasha was a German guy we kept bumping into frequently who ended up being our neighbour in Rishikesh. Like us, he was a fan of Tiruvannamalai as well and talking to him made hours passed like minutes. He was in Rishikesh for a 21-day Panchakarma treatment (an intense detoxification program which i would not really recommend) and over the days, he grew to be a really excellent friend whom i wish to keep in contact with for life.

Sascha from Germany and Shah from Nepal or izzit Sikkim? =p 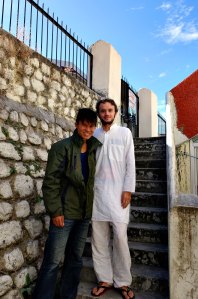 Morena was another interesting character Linda met online on Couchsurfing. An Italian who was in between jobs exploring India for one month, she was racing to absorb different parts of India as much as possible, a task that we think is overwhelmingly daunting (our salutes to her for being efficient in travelling solo around India with minimal rest in between places). Even she agreed and told us that the next time she comes over, she will just stay in one spot and relax. We met up with her and went to Mussorie, a nearby hill station together. We grew rather fond of her energetic and positive presence and missed her company greatly. 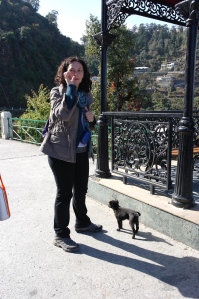 December finally arrived. Kat is going to Bhopal to meet her friend in a monastery. Phillip is heading north to Himachal Pradesh to conquer more mountains. Sasha is heading to the holy town of Tiruvannamalai. The three Taiwanese girls and Morena are going South to the desert state of Rajasthan. We wish to stay longer in Rishikesh (for me it is more like forever) but since my mum bought us a Desert Festival ticket in Gujarat for 15th December, we knew going with the flow would be to follow the Taiwanese girls. And so, our next adventures will be a chapter on Rajasthan – land of ancient warriors and splashful vibrant coloured artworks!

To see more travel photos, do add us on our Facebook Page, “Eudaimoniacs Singapore”. Happy travels!