Gokarna. A small South Indian village lies at the coast of the Arabian Sea. Sharing God’s creation with the Middle East – Yemen and Somalia. We stood on a cliff infront of Sri Rama Temple. What we saw was breath-taking. Sea hawks and butterflies decorate the skies and sounds of crashing waves brought peace to the ears.

Gokarna is located an hour south of the Goa and it’s around 450 kilometers (280 miles) from Bangalore, the state capital.
Getting to Gokarna
The nearest airport is Dabolim, in Goa. From there it’s a four hour drive to Gorkana. Alternatively, trains on the Konkan railway stop at Gokarna Road station, 15 minutes from town, as well as Kumta and Ankola stations, both around 25 kilometers (16 miles) from Gokarna. Gokarna is also well connected by bus from major cities such as Madgaon in Goa, and Mangalore and Bangalore in Karnataka. 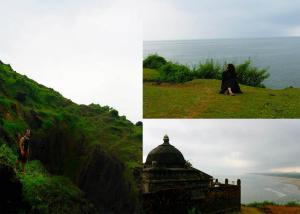 It’s 4am and fishermen were getting their nets and boats ready for the day’s catch. Thoughts circle about on what I want to do today. Trekking the four ghats (Eastern Ghats and the Western Ghats, they run parallel to the coast on either side of the Deccan plateau and meet at the southern tip of India) or just sitting still inhaling the salted air. Gokarna is a town unified yet, divided by 4 ghats. We are now at Gokarna Beach. Beyond this beach lies a beautiful green plateau leading to Kudle Beach. At Kudle, you can see a little bit more foreigners. Shacks and Chai shops occupy the whole stretch of Kudle. However, the sound of “OM” resonates in everything and everyone with an invisble melody, calling out to sunseekers who dare trek through it’s unchartered, rocky domains. This is where the party begins. Western and Indian foreigners flock to OM Beach, basking in it’s glory. There’ll be bonfires at night and hippies playing guitar under the moonlight.

The plateau leading to Kudle Beach 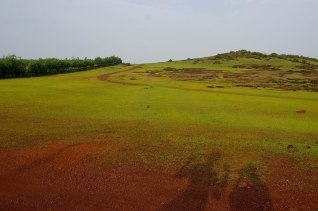 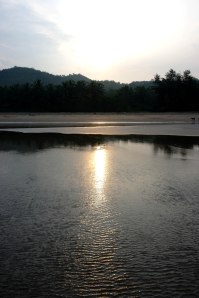 Villagers gawking at fishermen’s catch of the day 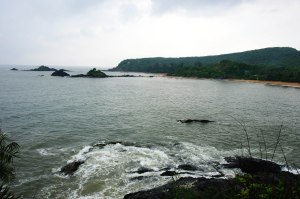 But wait. There’s more to Gokarna than just this. Enlightenment can be found everywhere if you look hard enough, or ironically, not at all. Curiosity besiege us to discover what lies beyond OM. Prettier beaches? A more magnificent landscape? or just the journey itself. Only the bold will dare to cross the thick forest leading to Half-Moon Beach. One have to pass through the thick forest, barbed wire and cliffs. At Half-Moon, we hardly see any other foreigners. It’s just us. For now. There were some shacks, more black, sharp rocks and bigger crashing waves. I feel like I’m in the movie, The Beach. 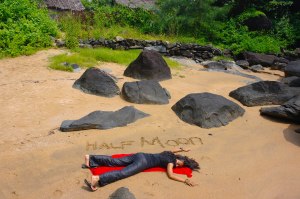 To get to every beach, one must be able to cross mountains, forests, cliffs and plateau. The terrains get harder each time. However, the ability to reach our destination and see the magnificent sights, makes it all worthwhile.

Just one more mission to achieve: To reach Paradise. Paradise Beach. The best out of all the beaches, was so they claim. Located at the far end of Gokarna. The fourth and final beach, where sands are barely untouched and white as snow, water as blue as Lake Camiguin in Philippines. To reach Paradise, one must learn to stay calm and trust his/her own instinct and follow the signs.

We have finally reached the much raved about beach in Gokarna called Paradise. Instead of trekking the dangeorus terrain, we were offered a ride in an antique Fiat Padmini, the last of it’s kind of that model in 1996. While going out for breakfast, we were invited by a Sadhu called Swami Giridhara whom we met at a temple on a cliff dividing the Main Beach and Kudle Beach. We were lucky to be in the company of another special Swami named, Yogaratna, Saraswati who was born in Paris, France, of Australian parents and raised in India.

Cruising along the coast of a fishing village in a vintage Fiat Padmini, accompanied by two Swamis. 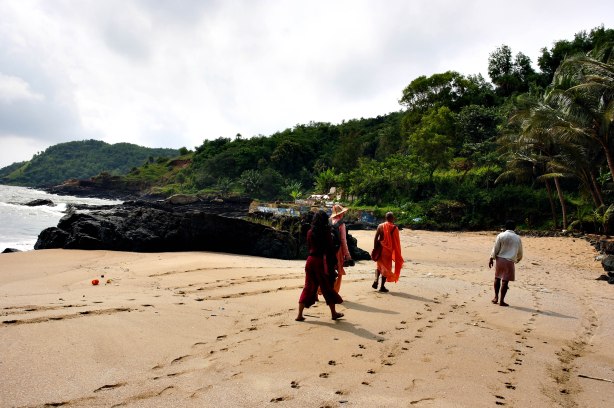 They were planning to visit an old saint living on an island only reachable by boat and only during low tide for he sits in meditation in a cave conveniently carved off from a cliff overlooking the Arabian Sea. We agree it sounds far-fetched because we ourselves took a few days to digest the overwhelming coincidences and timing of everything that happened.

When we reached the jetty, our noses were greeted with the aroma of diesel and drying fish. The jetty was primarily used as a fishing vessel berth and the fishermen were busy either refueling or doing maintenance works. The rest were occupied with laying dried fish leftover from the morning haul.

At the fishing dock, waiting for our ferry. 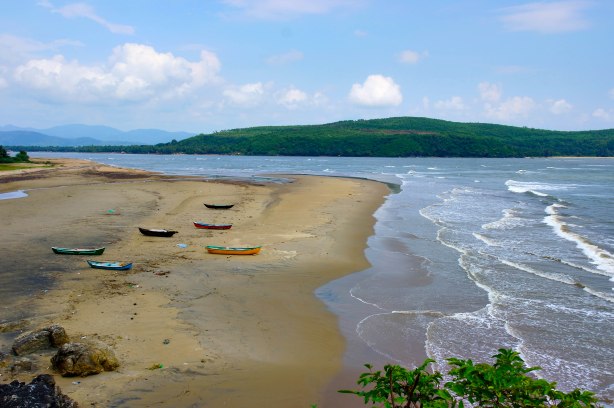 A 5-minute ferry crossed us safely to the fishermen’s village. We were surprised to learn that most of the island residents were Muslims and they spoke the best English I’ve heard so far in my short term in India. Another suprise, though unfortunate, was that the saint the two Sadhus intended to visit had passed away 3 years ago. The fishermen offered us a private tour around the island on their fishing boat for a small fee before returning us back to Gokarna.

From there we drove about 10 minutes to reach a dead end. A local told us Paradise Beach was only accessible through a 15-minute trek of which you need a guide (obviously he was making a rehearsed sales pitch but we had no regrets for we would really be lost without him).

Frankly, we were disappointed. All we saw were dilapidated shacks and plenty of empty glass and plastic bottles. Our guide told us that the police banned any sort of business or residential property here for it used to be saturated with drug abusers from the West, polluting the holy vibe of this temple town. There we sat in silence digesting the isolation and the strong playful waves making a symphony by crashing onto the nearby rocks. 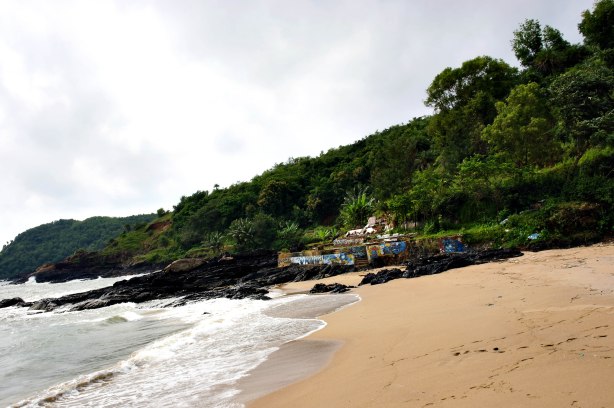 We left the place and received an inspirational quote from within about life:

“The experience of the journey is the Paradise. The destination is just an excuse”.