All good things have to come to an end. Unfortunately for us, we had to leave our paragliding family to continue our journey. We decided we needed to rejuvenate our bodies and do nothing for a while. Discussing with our paragliding mates, we opted for Rishikesh, the world capital of yoga. Unfamiliar with the complicated train system in India, we opted to pay extra for convenience by flight to Dehra Dun’s Jolly Grant Airport, 25km from Rishikesh.

From Kamshet, we had to go to Mumbai’s Chhatrapati Shivaji Airport and fly to Delhi, transit for 1 hour before heading to Dehra Dun. Our dear fellow paragliding pilot, Hemanshu, volunteered to host us for our short 24 hour stay in Mumbai before our departure. Leaving Kamshet in a jeep, we descended down from the Deccan Plateau to the most populated city in India – Mumbai.

We reached Hemanshu’s place around midnight. Stuck in a complicated avenue, we called Hemanshu for help and like a galiant knight in shining armour, he rode a scooter from behind and showed us the way to his colony (in India, residential buildings under the same management are called colonies).

There i was greeted warmly by his aunt who surprised me with my second birthday cake in India (altogether i had 3 birthday cakes this year in India when usually in Singapore, nobody cares). We slept about 1 in the morning, woke up early to catch the sunrise on his rooftop while having breakfast made by his lovely mum and then began our hectic tour of Mumbai.

First stop was Hemanshu’s office. He is a lawyer specializing in real estate and the ambience of his office really commanded respect though it was balanced by his humble character. The afternoon went by quickly with Hemanshu driving us to malls, newly developing properties in Mumbai’s ballooning real estate market and passing by some slum areas. And yes, all this while we were experiencing what driving in a gridlock city feels like and it does not feel good at all. Stress and forced patience were constant companions throughout.

We went to Marine Drive, home to the biggest Bollywood celebrities. By chance, it was Shah Rukh Khan’s birthday and there was a huge crowd of fans and paparazzi in front of his bungalow gates. We stayed for a while before heading off to Haji Ali Mosque.

Outside Shah Rukh Khan’s mansion. Hundreds of fans came to catch a glimpse of the birthday boy.

Haji Ali Mosque was a sight. Even the drive there was a magnificent sight. We had to drive past a newly constructed bridge that resembled San Fransisco’s Bridge. The mosque is situated in the sea and is only accessible by a tiny road which was heavily packed with stalls and sightseers. We watched the sunset and headed back to the carpark to meet our other paragliding buddy, Husein. 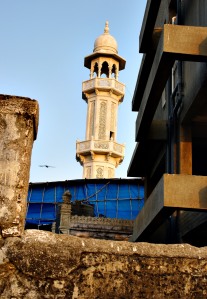 He brought us to her sister’s house and we were totally shocked by the grandeur of her apartment. Being a security guard to support myself through polytechnic, i’ve seen a fair share of what a wealthy apartment looks like but this was something else. In short, her apartment was the best i’ve ever seen in terms of aesthetics, view and technology. 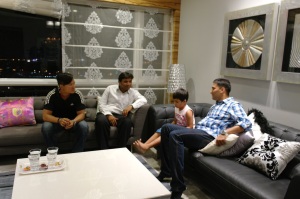 After that we went off for a long savoury dinner followed by a combined cake for the November babies – Linda, Husein and myself. We spent about an hour by the coastline before Hemanshu and Husein took shifts to drive us around Mumbai covering the iconic Taj Hotel and Queen’s necklace. We had a final cup of coffee together and all of us were getting drowsy from a lack of sleep.

Husein went home and Hemanshu painstakingly drove us to the airport punctually at 4am. In short it was a comfortable tour of Mumbai made possible only thanks to our paragliding buddies, Husein and ESPECIALLY Hemanshu. So with that, we would love to say our thanks once again to the both of them and rub our palms in anticipation of the adventures that await us in Rishikesh. Until then, we are in desperate need for sleep right now.